David Mitzi, an expert in developing new materials for solar cell and other energy applications, has joined the mechanical engineering and materials science department in Duke University’s Pratt School of Engineering. His research will focus on making emerging photovoltaic materials more effective, cost-efficient and competitive for the energy market. 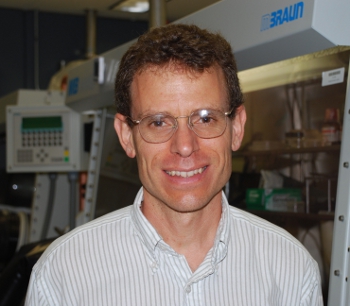 Nearly 80 percent of today’s solar cell market relies on silicon technology, which requires high-quality, single-crystal materials and relatively thick cells to harness the sun’s energy and is expensive to produce.

Mitzi’s research program will initially pursue two classes of materials with promise to outcompete silicon: perovskites and chalcogenides. Perovskites can combine organic/inorganic materials and functionality within a specific crystalline structure. Chalcogenides are compounds based on sulfur, selenium or tellurium, and have at least two examples already being significantly commercialized.

“The potential of these materials to revolutionize solar cells is very exciting,” said Mitzi, who joins Duke’s faculty from IBM’s T.J. Watson Research Center, where he has spent the past 22 years researching photovoltaic technology and more generally the search for and application of new electronic materials. “However, they’re relatively new and there are many questions that remain.”

In the case of perovskite materials, Mitzi has three goals. The first is to make them better suited for wide use in solar cells by removing the toxic heavy metal lead that the current generation of materials is based on. He also wants to improve their stability, as they are typically susceptible to moisture and air, and raise their performance in converting sunlight to usable energy to above 20 percent efficiency.

For the chalcogenides, Mitzi wants to replace the indium and gallium used in the current materials produced by emerging solar cell companies with zinc, tin and other low-cost and abundant metals. Indium is one of the rarest metals in the Earth’s crust and not uniformly distributed geopolitically. Roughly 70 percent of the world’s production is based in China.

The challenge Mitzi faces is getting the efficiency of the more earth-abundant metal-based devices to match that of the already proven materials. His group at IBM set the world record in efficiency for the upcoming zinc-tin material, however, and continues to push its performance level higher.

“I’d also like to diversify by looking into materials for other energy applications, such as storage and transmission,” said Mitzi. “If solar energy is ever going to make up more than 10 percent of our country’s infrastructure, these are problems that will have to be addressed.”

Mitzi began looking for academic posts where he could avoid the big city and find an intimate setting where he could interact with students on a regular basis. He was attracted to Duke partly by the number of colleagues he could see himself collaborating with, including Stefano Curtarolo, whose Center for Materials Genomics is using supercomputers to predict what undiscovered materials might have properties well-suited for energy initiatives. He also wanted to join an institution that was making energy concerns a priority.

“I was looking to move to somewhere that is making the very important challenge of energy a centerpiece of the program being constructed,” said Mitzi, who in his spare time is exploring all of the trails to run and mountain paths to explore that North Carolina has to offer. “The photovoltaic effort at Duke is one that is just getting started, but I think I can help develop this area and build it into one of the premier programs in the field.”