Seven Years at the Helm

It’s not every dean who knows how to surf. But the ability to catch the good waves while avoiding wipeouts seems to have translated from the beach to the engineering quad for Tom Katsouleas, who has led the Pratt School of Engineering for the past seven years.

A plasma physicist, academic leader and former Los Angeles County ocean lifeguard, Katsouleas came to Duke from the University of Southern California in the summer of 2008, just before the Great Recession caused some very choppy waters across all of academia. Despite starting his tenure as dean in the midst of serious economic challenges and declining federal funding for research, though, Katsouleas — who leaves Duke this month to become provost at the University of Virginia — can look back on an incredible ride.

Over the past seven years, in fact, Duke has been one of the fastest-rising engineering schools in the nation, in terms of both rankings and research funding (see sidebar). Pratt has successfully competed for seven multimillion-dollar externally funded research centers — a key marker of leading engineering schools — in areas ranging from metamaterials to environmental nanotechnology to materials science. It has launched new educational programs like the Master of Engineering degree and distance-based Master of Engineering Management, an Environmental Engineering major (the school’s first new major in 40 years) and an Energy Engineering minor. It’s attracting record applications for spots in its undergraduate program — up 46 percent since 2011. Its alumni are contributing to the school’s Annual Fund at a record pace, and there’s even a $100 million new building on the horizon. 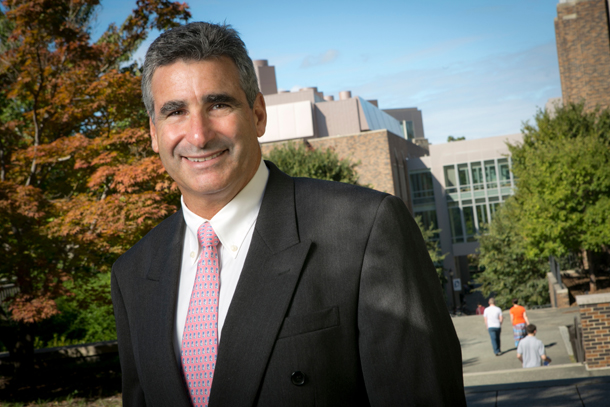 Rising to the Grand Challenges

Duke Provost Sally Kornbluth has described Katsouleas’s deanship as “transformative,” and Pratt’s profile is certainly higher and wider than ever before. Still, one thing has not changed — and it’s what drew Katsouleas to Duke in the first place.

“For decades, what has defined Duke Engineering is the fact that the school is an integral part of a top-notch liberal-arts university,” he said. “That’s been a perennial differentiator for us. It gives a Duke engineering education a unique flavor, and Duke engineering students a broad perspective that enables them to become leaders and innovators.”

It also uniquely positioned Duke to play a leading role in an emerging movement in engineering, he noted. “When I came in as dean, the profession as a whole was beginning to shift in focus from developing better devices to solving societal issues,” Katsouleas said. “The National Academy of Engineering’s 2007 list of 14 Grand Challenges for Engineering in the 21st century drove home the idea that engineers could apply their expertise in a larger context to tackle these really complex issues that affect us all, like making solar energy economical and engineering better medicines. Those problems require engineering solutions, but they won’t be solved by engineers alone — they’ll take teams that understand policy, business, health care and the environment. So a place like Pratt, where engineering students are learning in a highly interdisciplinary context, had an opportunity to take center stage in this national movement.”

Katsouleas made sure that opportunity didn’t go to waste. In 2008, Duke Engineering and partners at University of Southern California’s Viterbi School of Engineering and Olin College of Engineering hosted the first of a series of Grand Challenge Summits, where the idea for a new educational model was born: the Grand Challenge Scholars Program (GCSP). Endorsed by the National Academy of Engineering, the program prepares undergraduate engineering students to address Grand Challenges through an integrated research or design project, interdisciplinary coursework, global and entrepreneurial experience, and service-learning. More than 200 Scholars have graduated from GCSP to date, including 70 from Duke — and that’s just the beginning. This spring, Katsouleas and partners led a national initiative in which 122 U.S. engineering schools signed a letter of commitment to President Obama pledging to establish Grand Challenges education programs at their institutions.

“Tom’s vision, passion, and diplomacy have been absolutely critical to the success of this hugely ambitious project,” said Richard K. Miller, president of Olin College and a co-leader of the Grand Challenge initiatives.  “One of the consequences of these events and their growing international visibility is that the Pratt School of Engineering at Duke University has been thrust into a default position of national leadership. The visibility of the Pratt School has grown enormously and today it is recognized as the home of real global vision and impact in engineering education. I believe Tom and the Pratt School have changed the face of undergraduate engineering education on an international scale. Now that sets a very high bar for impact.”

The notion of connecting interdisciplinary teams to tackle big issues that underlies the Grand Challenges movement has permeated Pratt far beyond the GCSP. “Our relationship with other schools at Duke has never been stronger or more important to our future,” says Katsouleas. “We’ve had more cross-school partnerships and more joint hires with other schools over the past few years than ever.”

He cites examples like the Information Initiative at Duke (iiD), forged in 2013 by a supergroup of faculty from Electrical & Computer Engineering, Computer Science, Statistics, Mathematics and beyond to increase computational research and expand opportunities for student engagement in the rapidly growing field of “big data.” And the Global Women's Health Technologies Center, a first-of-its-kind partnership between Duke Engineering and Duke Global Health Institute. More recently formed are the new Duke Robotics Group that draws together faculty from engineering, computer science and surgery, and a nascent Materials Initiative aimed at developing new and improved materials to create better therapeutics, improve energy storage, speed computation and detect environmental hazards.

These new connections join a number of longstanding cross-campus partnerships, including the 40-plus-year-old collaboration with the School of Medicine that generated Duke Biomedical Engineering (BME). While Duke’s is one of the first and highest-ranked BME departments, the past decade has seen a major shift in the national landscape.

“Engineering schools across the country are in unprecedented growth mode thanks to a very strong job market, high starting salaries and the appeal of the Grand Challenges to Millennials, who see how they can change the world for the better as engineers,” Katsouleas said. “And one of the fastest-growing segments of the field is biomedical engineering.”

As much bigger engineering schools ramp up their BME programs, “We’re no longer going to be one of the country’s largest producers of BME students, but we can continue to be one of the best,” he said. “The key is our connection to the School of Medicine.”

This fall, the schools are launching a new initiative to strengthen their bond: MEDx (Medicine + Engineering at Duke). Building on existing ties — including the $20 million Duke-Coulter Translational Research Partnership, around $38 million in shared research awards annually, and joint degree programs including MD-PhD and MD-MEng — MEDx will provide seed funding and logistical support to catalyze new collaborations to improve human health. The schools recently announced the appointment of Geoff Ginsburg, MD, PhD, as inaugural director of MEDx.

“Our level of collaboration with the medical school is hard to match, and MEDx will take it to an even higher level,” Katsouleas said.

“I think these cross-Duke collaborations like MEDx, iiD, the Materials Initiative and others are the single biggest thing that will influence Pratt’s trajectory in the years ahead.”

Gearing Up for the Next Wave

A close second will be space — greatly needed to support the growth of Pratt’s student body, faculty and research programs, and of course all those cross-disciplinary collaborations. A major project on the school’s horizon, the nearly 145,000-gross-square-foot Engineering and Physics building, is being planned with all three in mind. A joint effort with Trinity College of Arts & Sciences, the facility will create a “collision space” where faculty and students from engineering, physics and the sciences work together to develop solutions to social challenges — much as the Fitzpatrick Center for Interdisciplinary Medicine, Engineering & Applied Sciences (CIEMAS) was designed as a bridge between engineering and medicine.

“The building is vital to realize our vision for hands-on teaching and research,” said Katsouleas. “It wouldn’t be possible without the generous support of committed donors, and we’re fortunate to have that.” During Katsouleas’s tenure, gifts to Pratt have averaged $33 million a year — including a major $30 million gift from Michael and Christine Pearson in 2014 and the $10 million Vinik Faculty Challenge fund established in 2012 — which Katsouleas notes puts Pratt on par with other, larger top-tier engineering schools, improving its ability to recruit and retain top students and faculty.

“If you look at the growth in our research portfolio and graduate programs over the past few years, that’s directly attributable to the faculty,” he said. “Pratt has excellent faculty who have been here for decades, and some terrific new faculty, and I think we’ll continue to attract great talent in the future. This is just such an easy place to recruit to, both because of the amazing student body and the collaborative environment within Pratt and across the university that supports everyone’s success. The key is going to be having the infrastructure in terms of both space and funding to keep that momentum going. And I think we’re well-positioned to do that.”

Katsouleas is leaving Pratt in a good place, according to George Truskey, senior associate dean for research, who will serve as interim dean of engineering while the university conducts a national search for a new dean. “Under Tom’s leadership, the quality and number of the faculty and graduate students has increased, as have research awards. We’ve had some really exciting faculty hires who strengthen our interdisciplinary research and teaching,” Truskey said. “And Pratt has great momentum. We have very clear strategic priorities that the faculty and leadership team set for the school, and we’ll continue to work together to achieve them. With the new building and new initiatives, there are a lot of exciting things on the horizon.”

As Katsouleas packs up his office — filled with books, photos, a research poster titled “Surfing Plasma Waves” and the personalized skateboard he’s been known to ride across Pratt’s landlocked quad — he admits to being sad to leave the place he’s called home over the past seven years, even as he looks forward to the new challenge of becoming a provost.

“This opportunity came about for me because of Pratt’s success over the past few years, and I thank everyone in the community — faculty, staff, students, alumni and donors — for everything they have done to support me and the school,” he said. “Pratt’s success really is a reflection on all of them.”